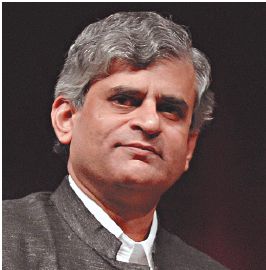 In March, the South Asian Studies Council hosted Palagummi Sainath, one of the most distinguished and widely read journalists writing on rural affairs in the world today. He delivered the talk entitled, “The Everyday Lives of Everyday People: Journalism from Below in the Digital Age.” Sainath was the Rural Affairs Editor of The Hindu until last year. He is now focused full-time on the construction of the People’s Archive of Rural India (PARI), launched in 2014, which aims to capture the labor, languages, livelihoods, arts, crafts, and many other aspects of life in rural India. It is a platform that combines video, audio, still photography and print, with free public access to the archive. His talk was an introduction to the vision and work of PARI, and the challenges facing the Indian countryside today.

Beginning with a number of poignant images and anecdotes that capture the pathos of rural Indian life, Sainath presented PARI as an attempt to record and document the voices of people in what he considers to be the most complex part of the world: an expanse of remarkable diversity, with more than 833 million people speaking 733 languages. Six of those languages, he went on to say, are spoken by more than 50 million, three by more than 80 million, one by more than 500 million, and many by only a handful, and thus, on the verge of extinction. PARI strives to bring these voices to the mainstream, not from the stories or histories of elites, but from the experiences of ordinary people. The basic philosophy that the movement tries to evince is “the everyday life of everyday people.”

It is important, Sainath stresses, to note that PARI is both a live journal and an archive. The rule of thumb has been to define anything more than 12 months old as archival material. The peculiarity of this archive, therefore, is that one can go and meet most of its subjects. Moreover, Sainath pointed out that PARI has two major biases: one being labor, and the other language. One of the fascinating aspects of the first bias, for example, has been a concentration on women’s work, especially in agriculture, but more generally as well, since bulk of the physical work in the countryside is done by women.

The motivation for the PARI initiative comes partly from the mainstream media’s very poor coverage of rural India. Sainath stated that he was the only rural affairs editor for any publication in the entire country (and perhaps almost anywhere in the world) because newspapers no longer seem to be interested in rural life. However, more than 68% of the Indian population is rural. PARI tries to connect one-third of Indians to the other two-thirds. The other motivation has been to document the beauty and diversity of rural life in India against what Sainath called its more barbaric aspects. For him, rural India is in the grip of a brutal and savage transformation, which happens to strengthen the barbaric and the regressive, while undermining the best and the beautiful. The gradual demise of the great schools of weaving, art, and pottery, for instance, is a process that the archive seeks to document.

In that sense, PARI is also a legacy site. Many aspects of rural Indian life will vanish in the next 20 or 30 years, Sainath warned, unless there is someone to record it. Here, he highlighted some of the unique professions in rural India, like the producers of the red terracotta horses from Bankura’s Panchmura village in West Bengal. At this point, he paused to show the audience a short video clip that revealed not only the travails of the terracotta workers but also the method by which the material is recorded for the archive. Sainath pointed out that the rural artisan who makes the terracotta figures earns, on a good day, not more than 200 rupees ($3.20).

When the film is recorded, the subject tells the story, the subject remains in control, with no instructions given by the cameraman. The archivists record subjects day after day until they feel they have enough to put in the archive and show other people. Sainath insists that this is very important: In PARI’s films, the filmmaker is necessarily invisible and doesn’t say anything on screen since, he argues, we ought to be much more interested in the labor and process that goes into the production of the beautiful artifacts people enjoy. The potter is shown digging in the ditches after the rains, saying that clay deposits are dwindling, and because of the real estate markets there are very few commons from which to access the clay that is so essential to his livelihood. What these forceful images could change, Sainath hopes, is the outlook toward rural occupations: At this point, there does not seem to be any understanding, respect or appreciation of the work that poor people do.

PARI, therefore, is a living journal and an archive, looking at ordinary people. But Sainath is careful about its purposes: Why, for instance, call it a ‘people’s archive’? Why not a journal? Historically, he explained, archives have either been reactionary places or they have been burned, torched, or destroyed by governments, states and invaders since the time of the Library of Alexandria. Archives have also been great sites—and continue to be great sites—of censorship by states: classification, declassification, official versions, and true versions, all of which Sainath took to be the province of archives in the elite sense. Hence, the idea of a people’s archive that governments and states cannot take over, control or destroy. Drawing on the work of James Scott, Sainath explained that peasants have historically resisted being recorded and documented because the first step toward depriving them of their land is to document and measure it. He said that has been the case with archives, records, and libraries. Here the idea is to record histories and stories neither told by victors nor by victims, but by “ordinary” people.

Sainath concluded by recounting some of the joys of working for PARI, noting that he spends around 270 days a year in the Indian countryside, especially in Odisha, Maharashtra, Andhra Pradesh, Kerala, and Karnataka, which are most affected by the farm crises in India. He spoke of his fascination with Odisha—a state with more than 60 tribal groups—and the yearly road trip he takes from Kalahandi in western Odisha down to Malkangiri in southwestern Odisha, right up to the border of Andhra Pradesh. It is a 280km ride that takes him and his companions a week to complete because they stop everywhere, including every haat and the homes of people they know. He stays with the communities he writes about or at least as close to them as possible. That, Sainath reflected, has been one of the most reward