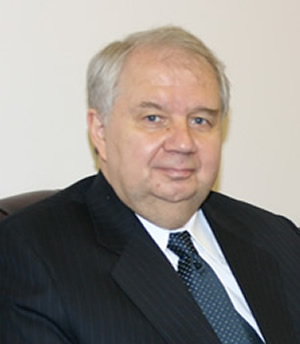 The European Studies Council at the MacMillan Center inaugurated its interdisciplinary Russian Studies project on February 4 with a conversation with  Sergei Kislyak, the Russian Ambassador to the United States since 2008. He spoke on the topic of bilateral relations with the U.S.

In this conversation, moderated by Thomas Graham, Ambassador Kislyak spoke on the current state of Russian-American relations. Prior to serving as Russian Ambassador to the United States since 2008, Ambassador Kislyak has held a number of high-ranking foreign policy positions within the Russian government, including Deputy Minister of Foreign Affairs and Permanent Representative of Russia to NATO.

Having represented Russia in Washington, D.C., for over a decade throughout the course of his career, Ambassador Kislyak quipped that the way to measure the quality of Russian-American relations is through the number of speaking invitations he receives. “The more I get, the worse things are.”

However, while current bilateral relations may be tense, Ambassador Kislyak stressed the number of issues on which the two nations have worked and will continue to work together, from combating international terrorism to preventing the proliferation of weapons of mass destruction and cooperating at the International Space Station.

“The most important challenges for the United States and Russia are very similar,” Ambassador Kislyak noted. “If we want to get them solved, we will have to work together … Fortunately, the list of things that unites us is two times longer and two times more important than the things that pull us apart.”

Ambassador Kislyak also tackled the question of whether the United States and Russia are staring down a return of the Cold War. While the Ambassador acknowledged a sea change in atmosphere since he last served in Washington in the 1980s, he noted that tensions are certainly high recently. In particular, Ambassador Kislyak criticized the highjacking of free trade through diplomatic sanctions, which has Russian businessmen pivoting away from long-term American contracts. Similarly, Ambassador Kislyak observed that because of preconceived notions and agendas, American perception of Russia is highly distorted.

The crisis in Ukraine and the inability to come to a common understanding has been the largest source of tension between these two nations for the past year. One of the fundamental problems, Ambassador Kislyak commented, is not even the interpretation of the facts on the ground but a systematic disagreement of these facts. “What is needed is an all-inclusive dialogue and a conversation on the redistribution of powers. Only a negotiated solution is a tenable solution.”

Ambassador Kislyak continued, noting, “Russia is a self-sufficient nation which does not have the same aspirations as the United States and will not simply accept the wisdom of other countries over Russia’s own.”

However, while tensions may be high, what is needed right now is a culture of cooperation. “We need to be working on what unites us and not what drives us apart.”