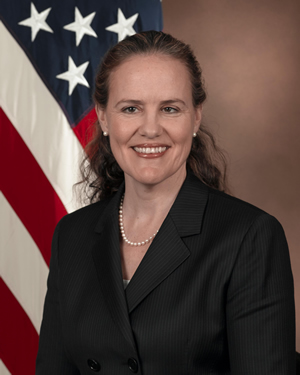 On February 24, the Jackson Institute for Global Affairs hosted former Under Secretary of Defense for Policy, Michèle Flournoy, for a town hall dialogue on leadership in conversation with Gen (Ret.) Stan McChrystal.

Flournoy currently serves as Senior Advisor to the Boston Consulting Group, and also serves on the Board of Directors of the Center for a New American Security (CNAS), which she co-founded in 2007. Previously, as Under Secretary of Defense for Policy from 2009-2012, Flournoy was the third-ranking official in the Department of Defense, and, at the time of her confirmation, the highest-ranking woman at the Pentagon in the department’s history.

From the White House Situation Room to the corporate boardroom, Flournoy shared her reflections on transferable skills of leadership. “There are 1,001 briefings about policy, but zero about how to manage effectively.”

Tough decision-making is part of any job that requires leadership, and the Under Secretary of Defense for Policy is certainly no exception. In a crowded, claustrophobic, windowless Situation Room, national security decisions are made that change the course of world history. In the lead-up to the Bin Laden raid, the cabinet was divided, and advisors had their reservations; however, “everyone in the room felt the decision was consequential, not only for the lives at risk, but for what it means for this presidency.” That moment, Flournoy recognized, “exemplified the extremely lonely position of the president.”

Flournoy reflected upon the importance of any new leader’s first 100 days in government office. “Getting off to a strong start is crucial. Your performance during the first 100 days can make or break your success in office.” Flournoy added, “During the honeymoon period of the first few months, it is important to set clear priorities and mobilize your organization around a common vision and journey.” Other key principles include doing one’s due diligence before even beginning work on the history and culture of the office, and making a concerted effort to avoid time-wasting activities.

With regard to other transferable skills from her time at the Pentagon, Flournoy reflected upon the importance of voicing one’s opinion. “You have got to raise your hand and say what you believe … your job is to speak truth to power.”

Flournoy spoke on the importance of delegating work and empowering staff. As a leader, Flournoy noted, one of her most important jobs was ensuring that dissent was welcome and considered, and that feedback was frequently solicited.

When providing advice for aspiring civil servants, Flournoy urged students to focus on their critical thinking and communication skills, their ability to distill large amounts of information and to make a name for themselves as an expert in a particular field.

At the end of the day, trust is the foundation of every team. “When there is distrust in a system, it is corrosive … facilitating trust and an open environment should be a priority of every leader.”