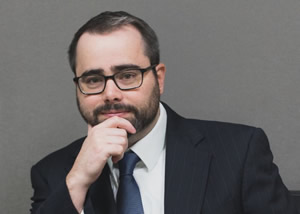 On February 13, Patrick Murck, Executive Director of the Bitcoin Foundation, joined the MacMillan Center and The Politic, Yale’s undergraduate political journal, in a talk entitled “Bitcoin: Building the Digital Economy.”

Prior to leading the Bitcoin Foundation, Murck served as the organization’s General Counsel and is also a founding member. His expertise as an executive in a number of digital currency companies extends across the legal and regulatory issues governing the use of Bitcoin, decentralized financial systems, virtual economies, alternative payment systems, and social loyalty and reward programs.

When discussing the origins of Bitcoin, Murck presented a question: “How do you move transactions in a peer-to-peer fashion over the Internet without having to trust anyone?” The answer, he posits, is through a decentralized virtual currency where one does not have to rely on third-party intermediaries or endure counter-party risk.

Bitcoin operates in a frictionless manner. In addition to removing financial intermediaries like banks and credit card companies, Bitcoin creates a different set of economics around payment processing. Essentially eliminating transaction fees and processing times, Bitcoin offers untold new opportunities for both the current financial system and for unbanked populations around the world.

The decentralized virtual currency landscape has evolved dramatically since the release of the original Bitcoin open-source software in 2009. Murck identified 2014 as the year of legitimization for Bitcoin as governments and big businesses began to adopt the currency. He projected that 2015 would be the year of mainstreaming for the general public.

Murck recognized the early stage, experimental nature of Bitcoin today and acknowledged that while many have experienced Bitcoin in positive ways, few bad actors have exploited the currency for illicit purposes. Murck, however, cautioned those who believe that Bitcoin is totally anonymous and argued that in the realm of illicit transactions, “cash is still king.”

When asked about the future of Bitcoin, Murck responded that he is hopeful for “a system that is apolitical that allows people to access a new global economy without having to ask permission. A lot of what we are seeing around the world is stalled-out wealth creation and underbanked populations and people pushed into informal cash-based marketplaces … If we remove this barrier and allow everyone to rise and fall on his or her own merit, we will give everyone in the world equal opportunity to participate. That will create a huge and lasting difference in the world.”