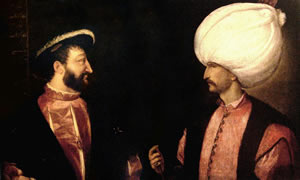 A group of internationally renowned scholars came to Yale for the conference, Mediterranean Crossings, on April 17-18. The Mediterranean has long been the subject of scholarly interest—from Herodotus to the study of immigration, to Europe today. During the twentieth century, towering figures such as Henri Pirenne, Fernand Braudel, and Americo Castro polarized scholarly and public debates in stark terms.  Relations between Muslims, Christians, and Jews were depicted alternatively as a clash of civilizations or as convivencia—the reciprocal and fruitful coexistence of these groups in Golden Age Iberia. Edward Said’s 1978 Orientalism reinvigorated those debates but did little to advance the scholarship on the period before 1798, which he treated as a residual category, intent as he was to demonstrate the nexus of power and knowledge that emerged with Europe’s militarized conquest of North Africa and its colonial ventures of the nineteenth century.

The historians, archaeologists, philologists, art historians, and literary scholars brought together for Mediterranean Crossings represent the cutting edge of a new generation of scholarship on the history of the Mediterranean, its many connections to the world, and its implications for policymakers and scholars today. On both days of the conference, students, faculty, and visitors filled the Luce Hall Auditorium, engaging ideas ranging from the geological formation of the Mediterranean to medieval maps of the sea, to globetrotting pilgrims. All of the conference speakers presented innovative work grounded in deep empirical research, often in several languages, using sophisticated methodological perspectives that challenge those older conceptions of Mediterranean history from the twentieth century.

In a world of crossings, Mediterranean Crossings helped both to forge new understandings of histories of encounter, exchange, and conflict in the greater Mediterranean, and to offer historically informed models for conceiving the contemporary world.

Professors Alan Mikhail and Francesca Trivellato of the Yale History Department convened the conference with generous support from the Edward J. and Dorothy Clarke Kempf Memorial Fund, as well as the European Studies Council, the Hellenic Studies Program, and the Middle East Studies Council at the MacMillan Center.