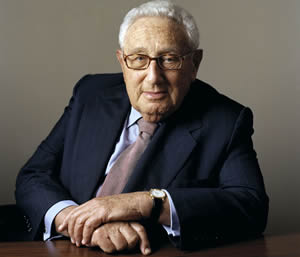 On April 10, the Honorable Dr. Henry Kissinger joined the Johnson Center for the Study of American Diplomacy for the fourth annual conference on “World Order 2025: Conflicting Visions of the International State System.” In a talk moderated by Niall Ferguson, Laurence A. Tisch Professor of History at Harvard University, Dr. Kissinger addressed the packed Levinson Auditorium audience on his vision of America’s role in a changing world order.

The challenge that American policymakers face is not strictly the crumbling of a European, Westphalian conception of world order, but rather the emergence of conflicting orders, namely from China, Russia, and the Middle East.

“What we consider world order today is our Western Westphalian state system, managed through a balance of power and a shared sense of justice. However, neither China nor the Middle East agree with this order. The Westphalian system was imposed on the rest of the world by imperialists, which worked, but, as we are seeing, only temporarily.”

It is no longer applicable to say that Russia or China or the Middle East are violating international order, but rather it is necessary to understand and adapt to these contending frameworks.

“Great Britain in the 19th century had a series of extraordinary leaders who, throughout the 20th century, had a consensus of Britain’s role in the world. Today, there is no consensus in America’s foreign policy. What are we trying to do, to avoid, or to accomplish? Each new American administration comes in with new ideas and tries new solutions to individual problems, but what the United States truly needs is a comprehensive grand strategy. Each new administration cannot keep being about new tactics.”

With regard to China, Dr. Kissinger posited that Xi Jinping has the greatest degree of domination over China since Mao. China is experiencing a dominance of the Communist Party as well as continued growth and development of the economy. President Xi’s grand strategy, according to Dr. Kissinger, is “to have China be a strong, prosperous nation, avoiding military domination, but rather a Silk Road approach of tying all other countries­—starting in Asia and moving next to Africa—to China as the Middle Kingdom.”

Dr. Kissinger rejected the notion that Sino-American antagonism is going the way of early 20th century Anglo-German relations; however, he did assert the need for the United States to develop a strategic concept of how we can push back on encroaching international Chinese influence.

In the Middle East, Dr. Kissinger cautioned that the region “is in the beginnings of a Thirty Years War, which could go nuclear, and the United States is playing an ambiguous role at best. The United States must get between Iran and Saudi Arabia  and be closer to each of them than they are to directly fighting one another.” However, the United States must not attempt to get further involved in the domestic affairs in a Middle Eastern country. “This is something that we simply cannot do right now, and we learned from the past that we should not do either.”

Dr. Kissinger believes that the recent nuclear deal with Iran was a mistake, given that it formally codified Iran’s nuclear rights. In 2003, the United States started negotiations with Iran with the declared purpose of preventing Iran from acquiring nuclear weapons. Under pressure of the Iraq War, Iran agreed. However, throughout the 12 years of negotiations, Iran has continued with their development and enrichment, creating an altogether different situation in 2015. The recent nuclear deal was an agreement of desperation and one that could still fuel a Middle East arms race. Dr. Kissinger observed that during the Cold War, “the United States understood what the concept of deterrence meant. There were plans to effectively deter and to account for the worst-case scenarios. No such regimes of deterrence or preventative system, however, exist in the Middle East region today.”

Dr. Kissinger concluded with an appeal to American policymakers: “We are currently in a pre-Westphalian time once again, in the middle of a new Thirty Years War structurally. There is relative global chaos, and something new will have to come of it. A new international construct is needed for global order. Hegemony should not be the American goal because we do not possess the capacity to arbitrate every dispute around the world … what America needs is for its major political players to think longterm and strategically, to think about the role of the United States in the world: as an intervener, a balancer or an abstainer. Ultimately, it is inconceivable for the United States to withdraw to the Western Hemisphere without abandoning all our ideals and principles of what a just world should be.”